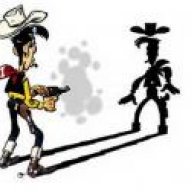 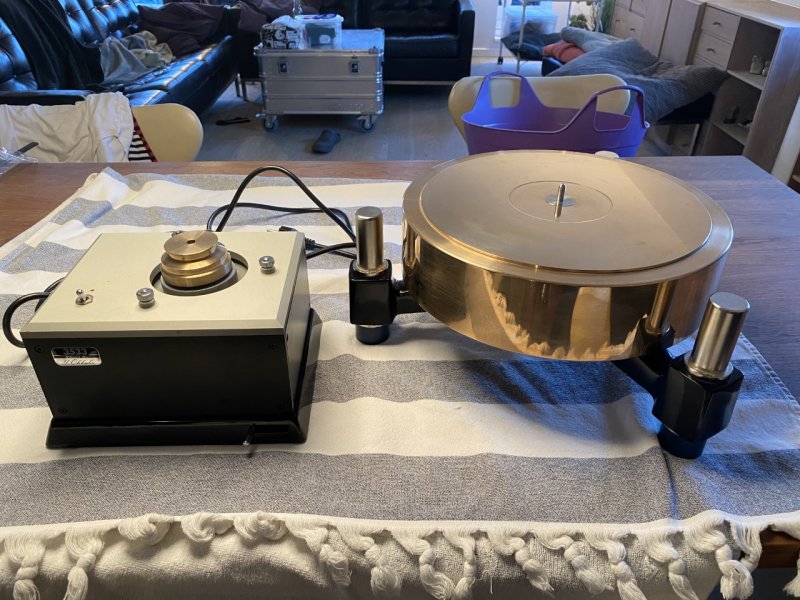 Toggle signature
solderslinger and faster than his own shadow
Reactions: the sound of Tao, ddk, Direct Drive and 1 other person

ddk said:
Some are but not all, I’ve also noticed additional vibration with a few turntables due to the extra weight. In many instances between the the heavy mat and heavy record weight you could be doubling the platter mass I’m not sure how robust is a bearing designed for a 4-5kg or less platter. Just something for people to keep in mind, specially with older common tts like Garrard, Thorens and even Linn.

My addition isn't even 4kg.

I haven't come across any usable TT's with such small bearings that it would be affected by that much difference, but maybe long term it's possible. You can get improved bearings for most of these tables if needed.
Toggle signature
Industry Affiliation: Folsom
Reactions: christensenleif@msn.com 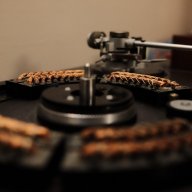 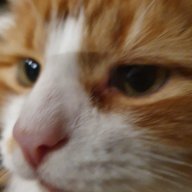 Greetings from down unda...
We're in lockdown at the moment, too many C19 bugs running around...
So what better to do than listen to some fine tunes!

Speaking of metal mats, I was using one by Spec, referred to as the Aluminium disc mat. Japanese high tech stuff, and sounds awesome! It was highly recommended by a few good mates and the limited time I had with it was very enjoyable.

Yes, limited, simply because due to severe static issues I'm having with this very mat. So, whenever I approach the TT and get ready to lift off the LP to change sides, all the static build up on me travels straight through to the Spec mat, discharging it onto the phonostage and onto the preamp, forcing it to shut down with a loud kaboom!

Obviously due to the monoblocks being powered on... so I reactivate the preamp and once again I hear Canon fire equal to that of 4th of July!

I've tried various gizmos, even approached the TT butt naked, only that static discharge went in a slight different direction... ouchey!
Grounded this and grounded that, nothing to avail. So I had no choice other than to go back to the carbon fibre mat that was supplied and recommended by Rega for my RP8. So all is good and absolutely zero static, plus I can put some clothes on! The Carbon fibre mat sounds mighty fine, and I'm enjoying LPs just as much without the Spec mat. Whatever said and done, the analog sound is something magical.

The Spec mat is up for sale since but no takers, I guess people were worried about the static issues. Anyone else faced similar issues and if so, would be interested to know your solution/s if any?

Can't you just touch a metal rack or outside enclosure of something instead of the TT first?
Toggle signature
Industry Affiliation: Folsom

Yes, tried that too mate. Infact that was the first thing I do, as I approach... I then reach out and touch the QX4 unit and poof! A nice big spark discharges from my fingers.

However, as I'm lifting the LP off the Spec mat, I can hear static floating around underneath, like those millions of mice running around in Qld farm land.

So, that static is built up from somewhere between the top layer of the mat and underside of the LP. When lifting off it causes a static discharge to the preamp, shutting it off.

I tried the D-stat III gadget and that reduced it by a very good margin, however after a few plays it happens again. I use the D-stat III each time I load an LP, running it across on both sides but this doesn't help when lifting off the Spec mat. There's no way around it.

I did try this though, using the D-stat III each time prior to lifting off the LP but that's an awful lot of time consuming just to change sides! Plus it works for a few change overs and then suddenly discharges again with a loud thud!

No one on any forum has ever come across my particular static problem. It's one of a kind!
There was another chap up in Qld who had the same issue but instead of tripping off the preamp, it would shut down the phonostage. He got pretty annoyed with it and figured it would do further damage to his phonostage, so he's also discontinued the Spec mat.

Thanks for helping though. Appreciate it.
Best, RJ

Ok, no one has thought of that as yet...

So, you mean run a ground wire from main bearing of TT to ground connection on the CJ phonostage?

The CJ phonostage has a separate ground terminal that is unused. If I add this ground wire will I be adding a second ground causing a ground loop...

yes a gnd wire from house of tt bearing
those two gnd terminals are probably connected...ohm between them...if no connection use the other used by rest of system
if connected, doesn´t matter
best
Leif
Toggle signature
solderslinger and faster than his own shadow

have loooked at pics of tt now.....is it electrical connection between bearing house and outrigger for armboard
if yes , good
if no, gnd the outrigger too and of course arm
Toggle signature
solderslinger and faster than his own shadow

Yes, actually that's what I was looking at as well. Only thing is, thereafter too many ground wires mate...
I like to keep things simple and the Spec mat causes nightmares! I'm not even sure if any additional grounding is going to work. I can't afford another kaboom! Tube life cycle deteriorates big time...

I also spoke with Rega about this, and they advised similar but the initial advice was to discontinue the Spec mat and revert back to the carbon fibre, and all will be well.

Really speaking all is very well!

What I would need to do is, try this out with the power amplifiers off. Just leaving the phonostage and preamp on with the TT running. Then do these trials with the wires and see if anything trips...

Otherwise, might as well put my hand up for Canon fire participant on 4th of July celebrations!

Cheers mate, I'll give it some thought.
Many sincere thanks, RJ

you can have as many gnd wires as needed as long as they end up in a star....
here in Norway I only gnd the biggest power consumer to power gnd..the rest is gnd together throught the interconnects......to avoid the loops you´re talking about.....dead quiet here with +110db horn system
Toggle signature
solderslinger and faster than his own shadow

I had a Music Hall TT as my first. It always had static problems.
Toggle signature
Industry Affiliation: Folsom 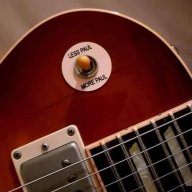 This totally took care of my static issues. It has a range of about 12". I bought a small scissor stand and used blue Tak to hold my unit down. Mine sits between 2 tables and I have a swivel under it so I can swing it back and forth,

Don't pay retail for them, ebay has used units for under $75.

Mmm... that's sounds like a pretty good solution indeed. Glad this worked out well for you.

In my case, I'm back to the carbon fibre mat, and the Spec mat is tucked away in its sleeve on the shelf neatly aside with the rest of the LP's. I just can't be bothered anymore, and I don't want to take any risks again by tripping off the preamp each time. So now, I'm just relaxing and enjoying the music, after all that's what it's about.

May be on my next time off on annual leave, I'll give it one more try, I don't know.

Thanks for your suggestion, I think it makes perfect sense though.
Cheers mate, RJ
A

Yes but they will sound more similar than vs carbon/felt/rubber/cork/foo foo.
Toggle signature
Industry Affiliation: Folsom
A

I ordered one last week, in the same dimensions. I chose Titanium Grade 2. I have been curious about titanium after reading all the AF1P user experiences. I also asked to keep as much thickness as possible out of the 0.25" plate that will be used, it will probably be closer to 6mm at the edge. I'm also looking into getting it coated with a DLC (Diamond like Carbon) coating, waiting for quotes. Since I'm running an idler, I want to damp the main platter, hopefully removing any last bit of the noise generated from the idler running on the platter. I ordered a fo.q platter mat. It comes with a 1mm and 2mm mat. I intend on using the 1mm mat first between the main platter and titanium mat.
Toggle signature
Daedalus Zeus v2.5+ BOWs, Air Tight 300R (ER300B-Mo), EMIA Ag Remote Autoformer, Allnic H3000 modded w/ Slage Ag SUTs, Artisan Fidelity 301 Statement, FR-66S, Koetsu Blue Lace, Wywires, Front Row, Stillpoints, Furutech, Silver Circle TCHAIK 6, Elrog
Reactions: Folsom
A

My Titanium Mat came in the other day and spent the last couple of days listening and tweaking the cartridge setup for the differences. I had to change VTA due to the thickness and azimuth. The azimuth adjustment was quite substantial going from -.4 degrees to +1 on my feickert spirit level. I first setup the azimuth with Adjust+ but have begun tweaking by ear. Need to tweak VTA/ SRA & anti-skate by ear too.

Machining quality was very good, visually perfect. I don't have any tools at home to take measurements.

I played with both mat directly on top of platter and using the 1mm Fo.q platter mat in between. With metal to metal, the idler wheel is very nearly silent. With the Fo.q in between, it is completely silent. The background of the music is silent, and groove noise has decreased.

The titanium is interesting. I have had a stainless steel mat in the past but preferred the copper top. The copper seemed to have a bit more body, weight and warmth (I hate using this term). The titanium seems to combine the advantages of the stainless with the copper. It almost sounds like the titanium is a more refined version of the copper mat while remaining more neutral. I no longer have the stainless mat, so I can't directly compare.

I am still tweaking the cart setup but so far, mostly positives. One thing I hate, is that I am fully extended on the VTA of my FR arm, but that is a turntable problem, not a mat problem. I am designing a new plinth that I will build next year that will address that issue. 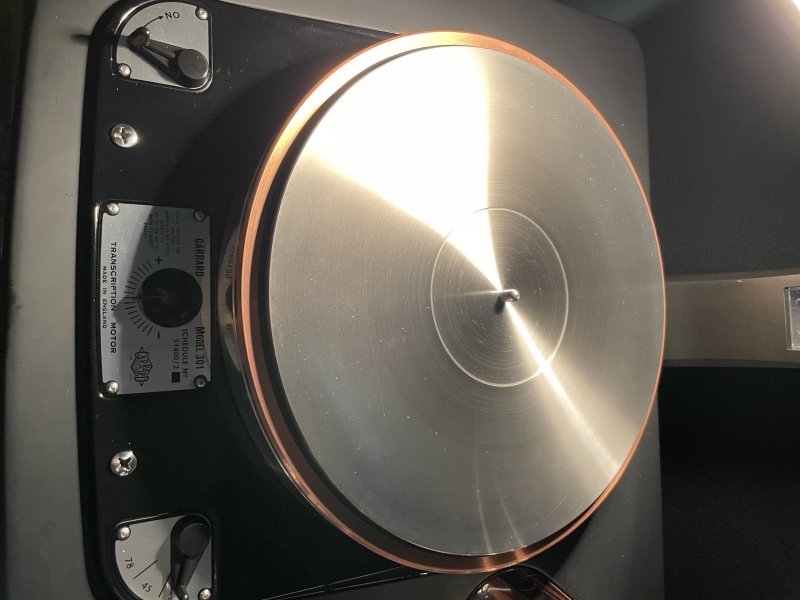 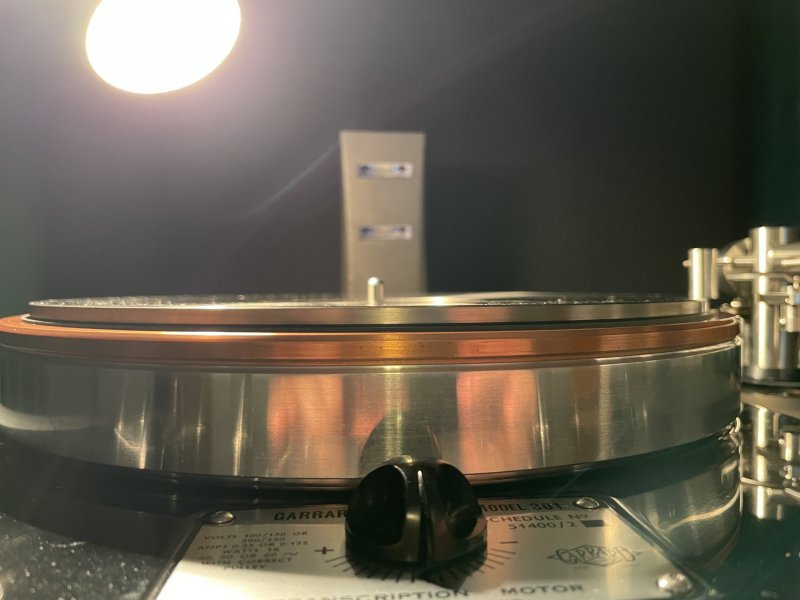 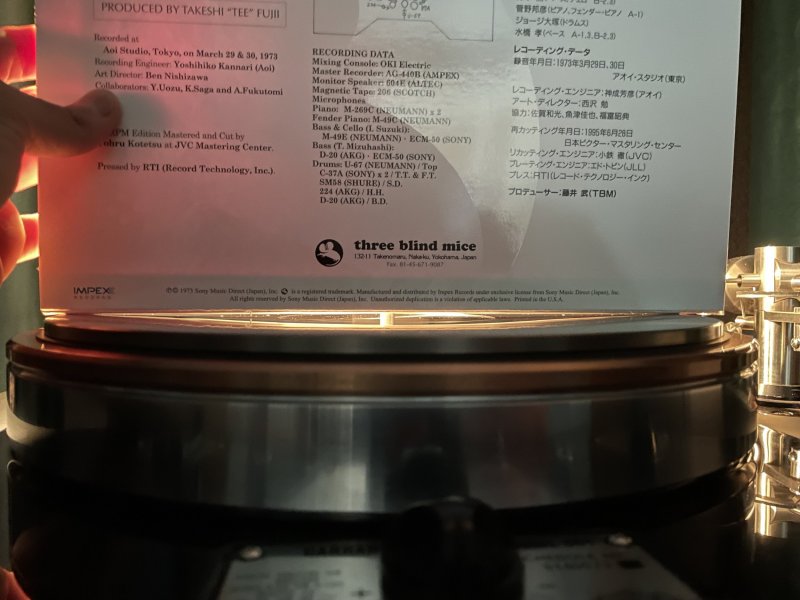 C
OMA polycrystalline graphite mat - why does it work?