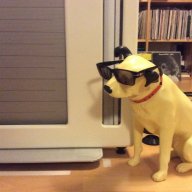 I recently decided I “needed“ an aufiophile switch.
Based on reviews I had decided for a Innuos Phoenixnet, when an expert pal at another forum advised me against it, as it was restricted to 100mbit speed and my new home (under construction) would have fibre to the home and much higher speeds.
So … maybe better look for a faster switch?
A single box, not another aftermarket power supply, not another umbilical cord: I liked that. Not another box for a decent clock, just one box.
Some folks say 100mbit is better, other folks state the complete opposite.
Me? Completely clueless. I am an old fart loving black discs and living in the past

Well, I took the risk and bought from an in Europe almost unknown company.
Their French importer was an utter disappointment and never even made an offer after I had requested one.
So I asked Mr. Ediscreation to double check his switch and package it with care not to have it sent back for repair around this planer again.

Delivery was fast, packaging excellent, thx a lot!
I put it on some stainless steel ball bearing footers on top of the Ferrum Hypsos (which feeds a less than impressive Swisscom standard internet box).
A new Wireworld platinum etehernet cable from Ediscreation switch to my T+A SD 3100 hv DAC, what could go wrong?

Initially, I was impressed by much more refined sonics, better soundstage, better clarity without tonal drawbacks.
A few days later came the feeling of lacking emotion.
Those other Ediscreation switch using guys had two box affairs, maybe I should have asked for that?
Damn.
Music became boring.
I brought another Ikea Aptitlig on stillpoints for the Ferrum Hypsos and put the Ediscreation switch on stillpoints stainless steel ultra footers, cap up.
Better, but still somewhat sterile.
Cap down: life, emotion, excitement, drama are back, big time. Call me impressed.
Bass is deep and punchy. Stage deep. No nasties. I listen to recordings from beginning to their ending, without flipping.
Music is fascinating now, transports emotion.

This is just a bloody switch?
Well, better treat it with respect like a real component, you will feel the returns immediately.

I do lack experience with other switches.
Nevertheless, this little box has my full respect and I am looking forward to trying a few decent mains cables (right now a TMR mains cable does the job better than I thought).

Well, what to put on top to make sure those bloody mains cables won’t pull it from it‘s platform?

I'm interested in this switch. I'm not sure I get how you fixed your problem, you put your footers upside down and everything improved?

You had no audiophile switch before this one? I currently own the etherregen. Based on comparisons seen here I'm tempted by the extreme version of the Ediscreation. 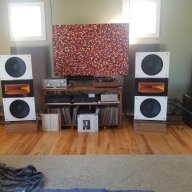 I think I did: see my pic above.
stillpoints footers, Ikea bamboo platform on more stillpoints, for both router and it’s Hypsos power supply. Acoustic revive 18000 power cables for Hypsos, and Ediscreation switch, SR purple fuse for Hypsos, both plugged into a Orange Audio transformer, soon to be replaced by a Stromtank 2500 Quantum for all frontend …

Your advice for more tlc is highly welcome!

I'm interested in this switch. I'm not sure I get how you fixed your problem, you put your footers upside down and everything improved?
Click to expand...

Digital Audio Forum: DAC, Transports, Digital Processing Forum Nov 15, 2022
Dasign
D
P
Love the info learned on this forum, so I did my own switch shootout