Jazz Jams for Justice and Profit
Jazz at the Philharmonic, a groundbreaking concert held 75 years ago integrated audiences, popularized live recordings, and brought jazz appreciation into the mainstream. 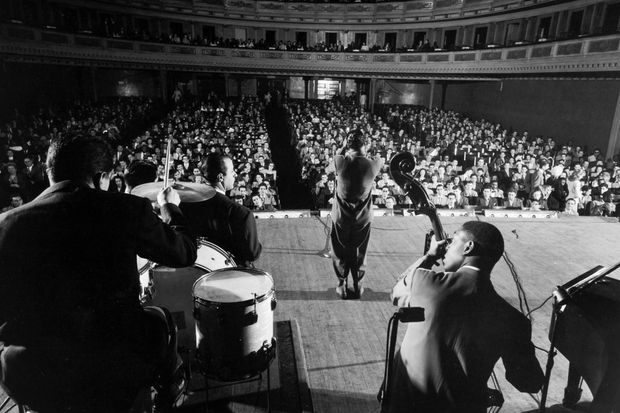 A view from the stage at a Jazz at the Philharmonic concert PHOTO: GJON MILI/THE LIFE PICTURE COLLECTION/GETTY IMAGES

On July 2, 1944, a Los Angeles concert marked a milestone in the history of jazz, the record business and civil rights.
As white, brown and black Americans fought overseas for freedom, in much of the country racial discrimination was the law of the land or the community custom. Just as American blacks were treated as second-class, so was jazz music. Marginalized, shunned by concert halls, the music was heard mostly in ballrooms, movie theaters and smoky nightclubs. At many of these venues, African-Americans had to sit—or dance—separately, or were completely barred from entering.
In Los Angeles, an irascible 25-year-old jazz fan and budding social activist named Norman Granz, who was white and Jewish, took a stand. To help raise money for a group of Mexican-Americans who had been unfairly convicted of murder, he organized a benefit performance. For the first time in Los Angeles, a jazz jam would be heard at a bastion of high culture, Philharmonic Auditorium. His experiment—recorded on disc—took place before a fully integrated audience of some 2,000 paying customers. 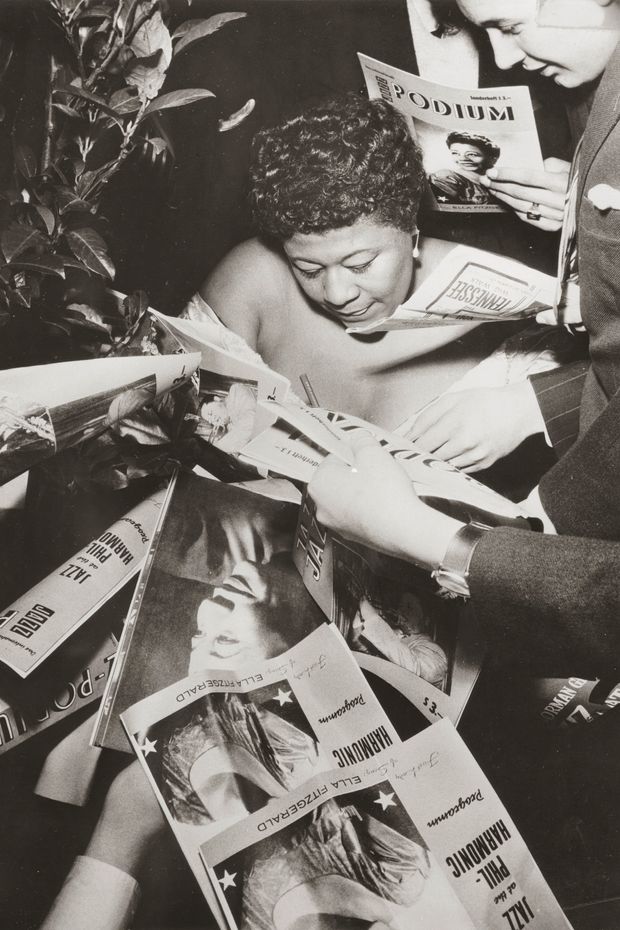 Ella Fitzgerald is signing autographs on in Vienna PHOTO: IMAGNO/GETTY IMAGES
Going in, Granz must have faced a number of questions. Could he raise public respect for jazz while leveraging the music for social justice and for money? Could he transplant the thrill and spontaneity of an intimate, after-hours jam session to a big hall? Could he manage to put together an interracial band that would transcend egos and play unrehearsed yet cohesive music? Would making live recordings of his shows prove practical and marketable?
The event was so rewarding that succeeding Jazz at the Philharmonic productions became for-profit and Granz established his own record labels. In 1946, citing unruly crowds, the Philharmonic barred such programs, but Granz blamed the ban on prejudice against mixed audiences. By then, he was taking his artists on the road. He treated them with dignity, paid them well, and bought them first-class travel. Bassist Ray Brown affirmed that “Black musicians couldn’t stay in decent hotels until Norman came along.” Tough as a tank, Granz broke precedent by insisting that every audience be racially integrated or else he’d cancel. Sometimes he even stood up to the police, as when Houston cops busted Ella Fitzgerald backstage for playing dice.
‘’I give people in Des Moines and El Paso the kind of jazz they could otherwise never see or hear,” Granz proclaimed. All across America, and eventually in Europe and Japan, audiences got to experience such peerless performers as Dizzy Gillespie, Charles Mingus, Stan Getz and Clark Terry. 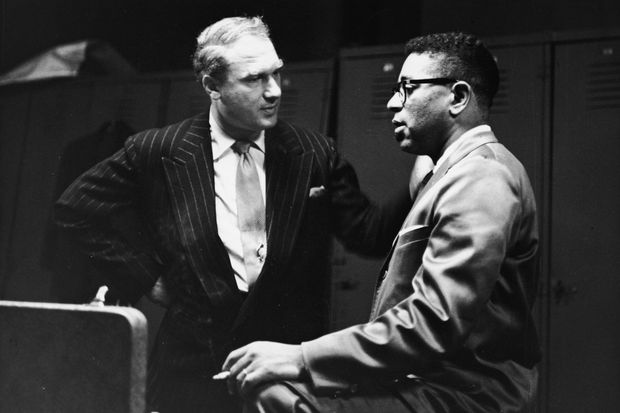 Norman Granz and Dizzy Gillespie in 1955 PHOTO: METRONOME/GETTY IMAGES
Initially mixing swing and bebop players, the JATP shows offered “all-star” jam sessions as well as such established groups as the Gene Krupa Trio. The jams, however, sometimes led to sheer exhibitionism, driving some critics and aficionados to distraction. Drawn by showy drum battles, trumpet jousts and saxophone fencing, the JATP tours drew younger audiences who were wont to scream, whistle and stamp their feet to egg on the musicians.
A visionary, Granz realized the audience and market potential in recording live jazz shows and capturing tunes as long as 18 minutes instead of the standard three minutes of 78 rpm records, which he accomplished by dividing long solos into multiple discs. He thus paved the way for such celebrated albums as “Ellington at Newport,” the Grateful Dead’s “Live/Dead” and the Allman Brothers’ “At Fillmore East.”
Instead of reaching a couple of thousand people once and then vanishing, the JATP concerts would endure. Instead of studio recordings, clean but sometimes sterile, Granz would offer imperfect performances before live audiences, with spoken introductions, applause, and shouts from fans. Instead of scrunching solos into three minutes of playing time, the musicians could play extended improvisations. Instead of performing preplanned arrangements, his artists could freewheel through each tune and go mano a mano. 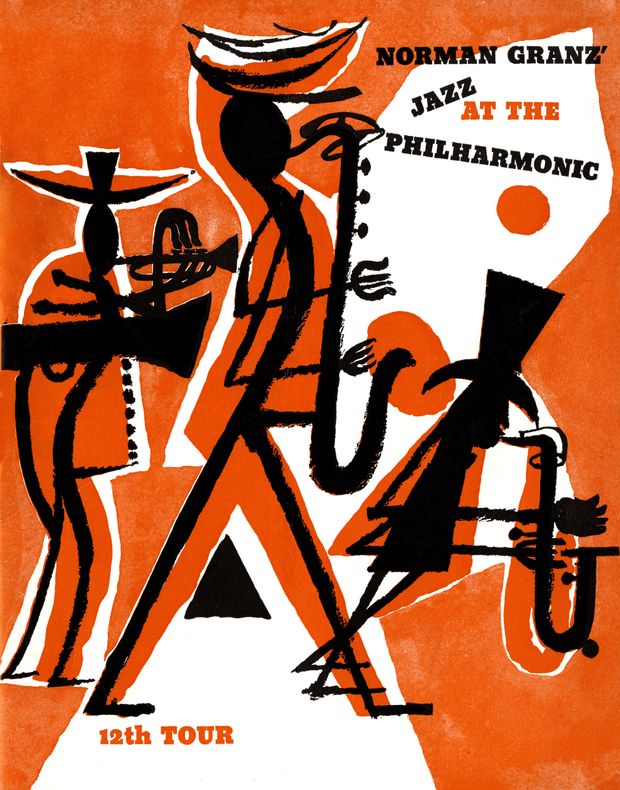 Poster advertises the 12th tour of Jazz at the Philharmonic PHOTO: GETTY IMAGES
The you-are-there immersion of live recordings put the listener in the front row, creating immediacy and impact. You can sense the boisterous devotees’ edge-of-their-seats eagerness to hear what comes next, which players and solos would win the night.
Over its rewarding run of nearly 40 years, JATP yielded hundreds of recordings (some still unissued). Granz’s very first such show produced a scintillating duel between guitarist Les Paul and pianist Nat “King” Cole on “The Blues.” The tracks from that seminal event were inducted in 2010 into the Library of Congress’s prestigious National Recording Registry.

An April 1946 recording of “I Got Rhythm” brought together a rare meeting of three saxophone giants: Coleman Hawkins, Lester Young and Charlie Parker. A September 1949 Carnegie Hall performance—headlined by Hawkins, Young, Parker and Ella Fitzgerald—produced such essential tracks as “Embraceable You,” “Lester Leaps In” and “Perdido.” A standout September 1952 Carnegie program spotlighted two sensational drummers—Gene Krupa and Buddy Rich—and the Oscar Peterson Trio rocketing through “Seven Come Eleven” at a take-your-breath-away 324 beats per minute.
Thanks to Granz, jazz attained new mainstream respectability, and the excitement, surprises and pleasures of Jazz at the Philharmonic live on through multiple music platforms.
—Mr. Hasse is curator emeritus of American music at the Smithsonian Institution. His books include “Beyond Category: The Life and Genius of Duke Ellington” (Da Capo) and “Discover Jazz” (Pearson).
Likes: NorthStar, Hi-FiGuy, ack and 1 other person

I have been to a lot of concerts of different ethic cultures, because i like music from different ethnic cultures, and never once experienced any push back whatsoever.
Music is the great equalizer that unites people. Also goes to show things are not as bad as some would make you believe.
You must log in or register to reply here.
Share: Facebook Twitter Google+ Reddit Pinterest Tumblr WhatsApp Email Link