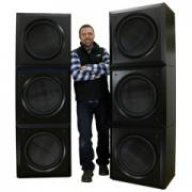 I figured May the fourth would be an appropriate time to add some info on this theater which was upgraded this past summer. The owners get a lot of use from the theater, which was a major focus in the construction of their custom home about 8 years ago now. I say owners, as the wife drives the upgrades and movie watching as much as the husband. Fortunately they are both happy to share the result with others. This is a unique case where this couple were customers of mine well before Seaton Sound, when I slaved for a boutique retailer helping them install a first Aerial Acoustics system with a pair of Velodyne HGS-18s more than 15 years ago. The next upgrade of their previous home was the first ground-up design and setup of a dedicated theater for myself and a friend Jamie Pauls, now owner of F1 Audio in the Chicago suburbs. I moved on to other ventures and starting Seaton Sound, while Jamie helped the owners plan a purpose built space in the basement of a new custom home they built in the area. He helped them set off a 20' x 30' x 12' tall area of the basement for just this purpose.

While originally there was no plan for a "themed" design, one night while watching the opening scenes of Empire Strikes Back, Jamie had an idea for a conceptual look in their theater inspired by the opening scene on the bridge of the star destroyer. Later many of you might have seen these two images of the resulting theater circulate through online articles: Years later the owners finally killed one of the HGS-18s in the huge new space. After a few disappointing demonstrations, their searching for subs to fill the space online found more than a few recommendations to Seaton Sound, and we reconnected. With a quick solution to a pair of SubMersives we then started discussing the next big upgrade. We bumped to 4 SubMersives for the large space, started planning, and set up a demonstration of our Catalyst 12C speakers which were much better suited to fill their large room with clear dialog and effortless dynamics. They loved the idea of pushing all the gear behind the fabric wall where I could then conceal 3 of our Catalyst 12C loudspeakers and 8 of our new F18 subwoofers with 8,000W of power located comfortably in the equipment room. For surrounds we added our new Spark and Spark XC speakers which use the same 8" coaxial mid-tweeter (identical >250Hz) for 4 surrounds and 4 Atmos height channels. We upgraded to a 14' wide AT screen from Seymour Screen Excellence using their Enlightor 4K material lit up with a Wolf Cinema SDC-15 Ultra 4k projector, and surround processing handled by a DataSat RS20i.

While the aesthetics of the room were quite impressive, the acoustics were an early attempt from the aesthetic designer, and left lots of midbass energy rolling through the room and too many hard surfaces. It was less offensive than would be in a small space due to the large dimensions, but higher playback volumes quickly became uncomfortable as the sound simply didn't die fast enough between the dynamics. I brought in construction and acoustics contractor Accurate Acoustics to handle the demo, construction, and acoustic material installation as I designed. With the room having an outer concrete shell, the entry doors not being acoustically sealed, and the couple and dogs being the only ones in the house, I abandoned concern for sound containment, and instead prioritized acoustics in the room. Here is what we started with:

Originally all of the black fabric accent panels on the side walls only had 1/2" foam with solid MDF behind them. We carved out each opening placing Roxul and a surface of Recore behind each piece of fabric which we updated to modern fabric track for a cleaner install and serviceability. With significant depth behind the openings, we hugely increased the absorption below 500Hz in the room, greatly improving the dialog clarity. To further control the sound in the room, we built out the front wall by 7" with 6" of Roxul and 1" of Recore in the areas around the screen where there were no speakers, and 3" of Roxul and 1" recore behind the screen in the area left around the subwoofers and center channel. To keep balance front and rear while also concealing the rear speakers, we built out a graphite fabric at the rear to conceal the angled rear speakers while similarly holding 6" thick Roxul surfaced by 1" Recore. The large entryway at the rear kept this from covering the entire rear wall making for an appropriate balance with the front of the room. The resulting acoustics were dramatically cleaner in the lower registers, with much more comfort while talking and improved dialog clarity, but the reflective ceiling and side wall areas still feels like a comfortable space and not an acoustic abyss.

Here is a walk through video I posted up before we started demo of the room:

Of course the fabric track and walls make it much easier to fit any scale of speaker and subwoofer we want. Here is a look at the demo process of what was hidden behind the new screen and fabric: Thanks for sharing with us a very cool home theater room, with pictures and a great presentation. I enjoyed watching the video and marveling @ the room's design for prime time Star Wars movie watching. Way to go to the owners, what a movie room!
Toggle signature
All the Very Best, - Bob --------- "And it stoned me to my soul" - Van Morrison --------- AudiophileAudition

Thank you Steve. This theater is awesome to experience, but even more so given my history with the owners and their journey to this rather impressive present iteration. In the first 2 demo photos you can see there is a false floor installed over the front seating pits. That wasn't made for the renovation, but rather that is a temporary stage they use 1-2 times a year when they pull the seats out and bring in about 24 folding chairs and have an artist or two perform in the room. It's turned into quite the event each year, and with all of the gear now behind the fabric and screen, no gear has to be moved for the events, and the system remains functional. The artist they usually have come by and perform, Cathy Richardson, had not long ago did a tribute performance at the Rock 'N Roll Hall of Fame with Jefferson Starship who she performs with among many other projects. It was nice to be able to queue up this and a couple other performances before she went on. I have a few pictures and video from this year's party I'll have to see if I can get posted up. It's certainly a very fun and unique dual use of the space, and the acoustic improvements made the live performance dramatically better as well.
Toggle signature
Mark Seaton 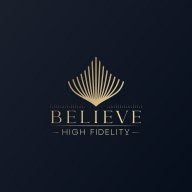 Perfect. Now I know who to count on for my Star Wars themed movie room as a Star Wars junkie. Amazing work Mark.
Toggle signature
Believe High Fidelity Ltd is the North American Distributor for: