You are using an out of date browser. It may not display this or other websites correctly.
You should upgrade or use an alternative browser.
E

It will be paired with Tchaikovsky Melodie

Both are live recordings
Enjoy!

Ed Pong and his wonderful Ultraanalogue Recordings continue to bring goose bumps to my skin when listening to these tapes........

Yet another stellar offering from Ed Pong’s Ultra Analogue label, the Mendelssohn Violin Concerto remains one of the most beloved works in the classical music catalog. This riveting performance of violinist Alena Baeva and pianist Vadym Kholodenko mark them once again as emerging superstars on the world stage, and this recording in particular is surely one to be savored by audiophile and music lover alike ... not to be missed!
Last edited: Mar 22, 2020
Reactions: astrotoy and Steve Williams

My copy is on its way from Canada. We saw Alena perform in Oxford this past June with the Oxford Philharmonic playing the rarely played Schumann Violin Concerto. She is a great violinist. Won the Wieniawski Competition in 2001, when she was 16. This is one of the top competitions in the world, won first in 1935 by Ginette Neveu when she was sixteen, upsetting the favorite David Oistrakh who was a decade older. Alena went on to win the Paganini Competition three years later, and the Sendai competition two years after that.

Alena's accompanist for the Concerto (he plays the piano version of the orchestral accompaniment), is no slacker either. Vadym Kholodenko won the Cliburn competition in 2013.

mine is on the way as well.

I received my copy of this tape today. As always the care in packaging these tapes is exemplary. Ed is to be commended on how meticulously he packages his tapes.

I think I have every Ultraanalogue Recordings Ed has produced. Until now I had several favorites over the years but today was a bird of a different feather. Hands down this tape is truly remarkable and has supplanted my previous favorites. If you are a classical music fan (and even if you aren't) and love to listen to well recorded music, this tape belongs in the library of all tape heads. It is that good.

The tape consists of the Mendelsohn Violin Concerto and Tschaikovsky Melodie with Alena Baeva on the violin and Vadym Kholodenko on the piano.

Both sounds were similar yet different. IMO the timbre from the Del Gesu was so life like that I felt I was in the first row dead center. Perhaps it was the nature of the selected music but the Del Gesu in both pieces was the most life like violin I have ever heard in recorded music. Simply put this is a must have

The Tschaikovsky Melodie was also beautiful.

This is a tape that one will cherish and IMO it belongs in every tape library. Kudos to you Ed for being at the very top of your game
Toggle signature
Steve Williams, aka oneobgyn
There's ALWAYS another Steve Williams BUT there's only "oneobgyn"
USA Dealer of Center Stage Feet and owner of PitchPerfect Sound (www.pitchperfectsound.com)
Dealer Lamm Electronics
My System 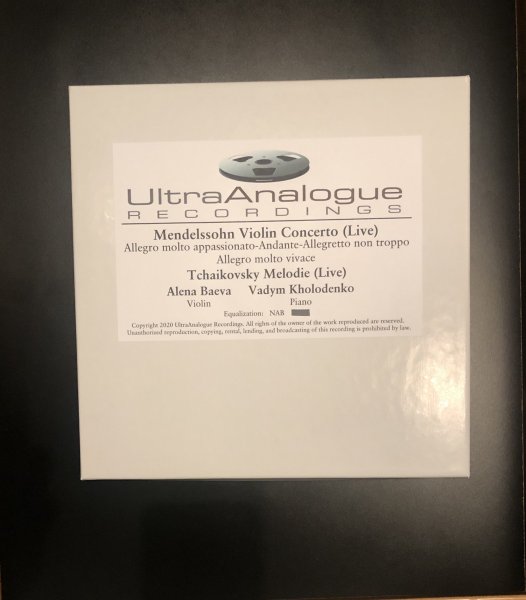 My tape also arrived today and Steve has hit the nail on the head. The del Gesu is a wonderful, big sounding instrument. I understand that Alena has it on loan from an anonymous patron. I have a bunch of the top analogue era Mendelssohn concerti and this one is very special. First, a comment on the concerto itself. If you are not a big classical music fan, the Mendelssohn concerto is ranked as one of the very top violin concerti - I would say with the Beethoven, Brahms and Tchaikovsky.

However there are three things that make this recording special. First, it is recorded with a piano playing the orchestral part. To me, that makes hearing the melodic and harmonic lines much easier to hear, albeit different from an orchestra. Second, recording in Ed Pong's home studio/chamber concert hall makes the space much more intimate, giving the sense, as Steve described it, as sitting in the front row, so the violin and piano are right there. Ed has really gotten the microphone placement and electronics down pat. Of course, third, this is about the only way to hear a great violin concerto played by top artists (Alena Baeva has won three international competitions and Vadym Kholodenko, the pianist, was the 2013 Cliburn winner) recorded today on 15ips 2 track tape.

For classical music aficionados, Alena begins the performance by explaining that the great violinist Ferdinand David, good friend of Mendelssohn, made suggestions to revise the concerto during the six years it took write the concerto. David went on to perform the premiere of the concerto. In 1989 an autographed manuscript of the concerto was discovered in Poland with some differences. It is this 1989 manuscript that Alena plays.

Ed Pong has been doing these recordings for a decade and they have all been solo instruments or small chamber ensembles. Starting last year he has begun to record concerti (the Tchaikovsky Violin Concerto with Angelo Xiang Yu) with piano accompaniment. I look forward to more new concertos recorded by Ed and his great cast of talented performers. I can think of many potential pieces to be heard this way.