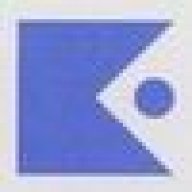 My No.6 fluid and Osage brush came in the mail today, who knew I could get excited over something like this?

Oh, and reset my VTA a few days ago, 98% of surface noise vanished.

I have been holding records like a pizza dish on the blank band near the lable while using my Hunt brush, it works wonderfully.
George, Architect
M/L Aerius + Tubes + Vinyl
Likes: timztunz

Today I moved my audio rack and column pedestal that holds my record cleaning machine.

As cleaning records creates static just as playing them does, my ionizer is now located in between the turntable and RCM.

This means I rotate the ionizer for cleaning, and turn it back for playing.

In fact I'm using the ionizer as a dryer after the last record rinse while I rinse out my brush with distilled water in the nearby bathroom. I just lean the record against the wall and ionizer while it sits on the RCM.

Did just one LP, Robin Trower's "Twice Removed From Yesterday".

I've had this LP for 40 years and it's never sounded so clean. 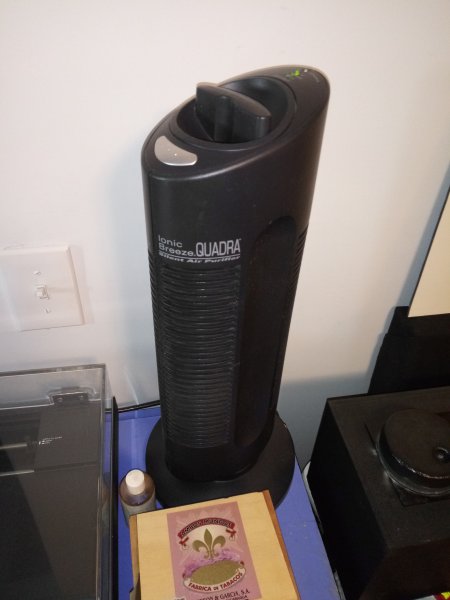 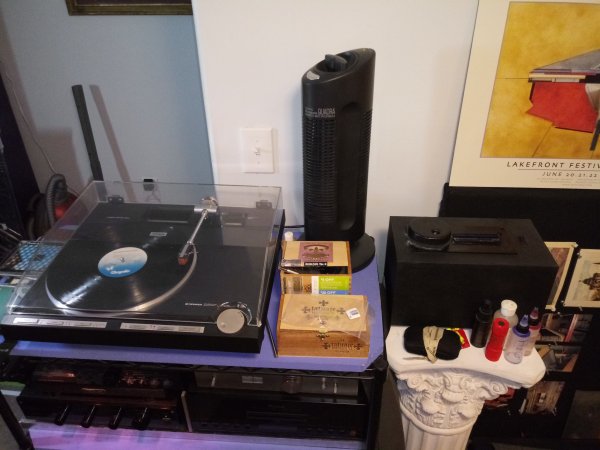 timztunz said:
I have found this brush to give the best results.
Click to expand...
My order from Sleeve City came in today that included the Thunderon brush.

I had every light on in the house so I could really see what was happening.

There was to my eyes very little dust on the LP. Something the Hunt brush could easily handle. However, the Thunderon was coming up with a lot of stuff I had not seen, I really didn't know where it was coming from, including hairs from nowhere.

And as noted by a user comment at the SC website indeed some debris was finding it's way over to the other side of the LP.

Jumping from one side to the other or just jumping off the surface like it was on the surfaced being brushed I could not really tell. However, some of it was crawling over the edge - tiny amounts.

I suspect my old West German wool army sweater was the source of some of the hairs. Maybe I have to hold the record even further from my body.

In any case, I did both sides 2-3 times until I was happy that all had been removed.

Listening to the LP now, The Cure, Kiss Me - Kiss Me.

Not a miracle, just science.

I estimate at least twice as much debris was removed over any other brush I have used, and I am being very conservative in my estimate.

The LP sounds better than most wet cleanings I used to do with my old fluid.

Just did sides 3 &4 of the double LP set. Took less time because I was careful to not let my sweater sleeve ends at my wrist touch the LP. That is where the hairs were coming from.

As far as dust removal, I will stick with the 2X estimate.

The aggressive large sweeping motions shown in the video works better than a slow meticulous circular path I used the first time and had to use with the Hunt brush.

Sweep away, and dare to be bold about it.

Just roll up your sleeves first. And if you have a big belly, suck it in, it's for a good cause. You want the system grounded via your fingers, not other body parts with hair laden clothing that can transfer.
Last edited: May 11, 2020
George, Architect
M/L Aerius + Tubes + Vinyl

The other item that came in the mail was Groove Washer SC-1 Stylus Cleaning Kit.

Just a brush and some fluid.

Compared to my lost Last brush, this new one's handle is longer and easier to use. In addition the bristles are finer but more densely packed, much longer, softer and form a rounded dome crown top.

I feel better using it than the temporary painter touch up brush I had been using since the big move.

I got smart this time, pulled my hairy sleeves up to my elbows.

This 1978 LP was purchased new in the early 1980's. The clear protective jacket tells me at one time it was on my RCM.

Pulled it out, looked brand new.

I think dust was attracted to it the moment I pulled it out of it's paper sleeve, but the Thunderon got it all and it stopped being such a dust magnet. 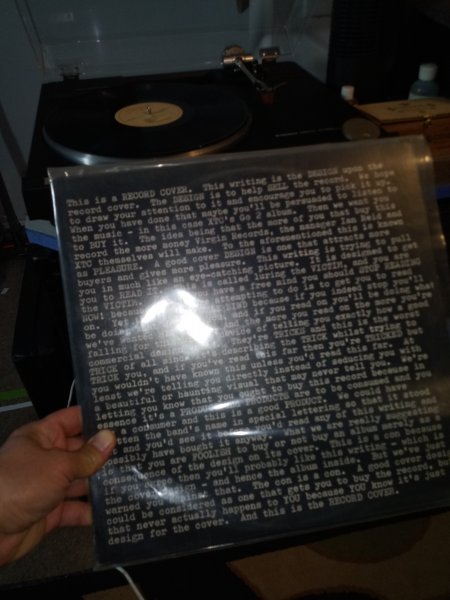 You gotta be in the mood for it.

Brushed with Thunderon, sounds as good as with RCM.

I've brushed several LP's since last update. And watched slightly dusty and dull LP's get all shiney clean, and with none of the static of a RCM.