Advent 100A Dolby B noise reduction.

Anyone who has collected prerecorded tapes from the Barclay Crocker company has become aware of the limitations imposed by the necessary decoding of the Dolby B noise reduction used by that company. Over the years I've assembled quite a few Dolby B units from Teac, Sony, Advent and Integrex and felt that the Advent 100A and the Integrex were the most neutral sounding. I began a project to try and learn about how the Dolby designed circuit works and maybe find a way to improve the sound. I built a replacement regulated power supply for the 100A and replaced all of the components (with the exception of the transistors) in the two playback processor boards and the final output circuit boards. I also used Advent's service manual to carefully adjust the critical Dolby threshold levels and meter calibration adjustments. These changes produced a significant improvement in the transparency and freedom from grain in the way my tapes now sounded. The next step is to see if I can build a vacuum tube output stage to replace the one Advent used and see if the change is what I'm after. Here is a photo of the test setup, the Dolby unit is feeding a tube preamplifier I built for this experiment. 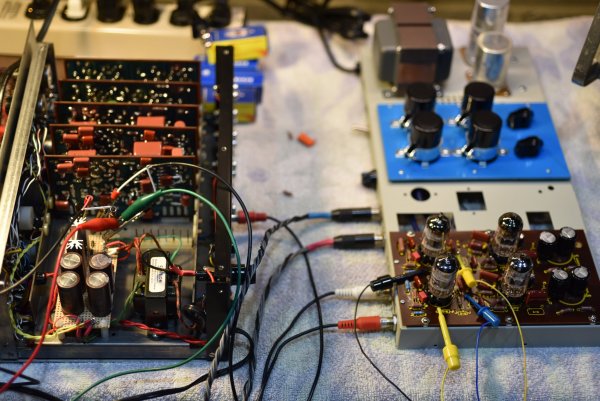 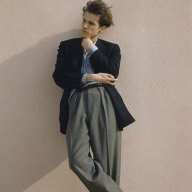 Is this project intended to only decode old tapes, or do you want to use it in new recordings?
T

Thank you, Larry.
The goal is to decode old tapes, ones that I've collected over the years, especially the Barclay Crocker and the Philips recordings. After making some adjustments to the feedback resistor I was able to play some music. In this photo I'm using my Stellavox Sp7 to play a Barclay Crocker tape and listen to the playback on some old headphones and excluding some low level humming heard the result. I must say not bad at all for a first try. 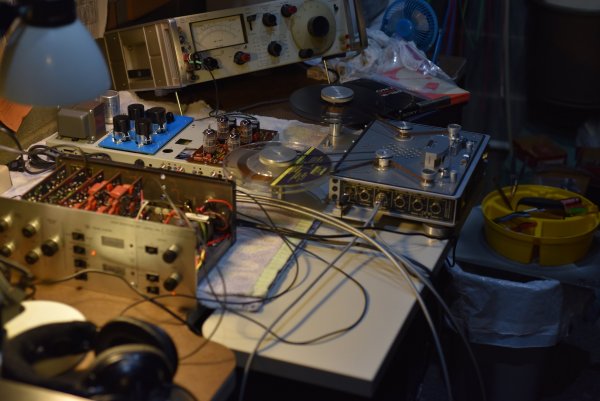 Perhaps a bit of information about the Barclay Crocker tapes would explain my attempts at getting the most sound quality from them. The company was in operation from 1977 until 1986 and was based in Poughkeepsie, New York. During that time they produced approximately 350 titles. Most of the selections were of classical music with a few jazz artists represented (Marian McPartland and Joe Venuti) and one or two selections from Joan Baez. They would obtain a license from a record company and receive a master tape which they would evaluate and if approved would make a 1" tape duplicate on an Ampex machine. This 1" tape would then feed a series of duplicating machines and operating at four times playing speed (industry standard was copying at sixteen times playing speed!) produce between 200 and 500 copies of each tape. The tapes were offered in simple but well made boxes with plenty of enclosed information about the performance and played at 7.5ips in the 4 track format. From testimonials by former employees every copy was carefully done and a high level of quality control was the standard. The majority of tapes used the Dolby B noise reduction system to reduce tape hiss by approximately 10dB by compressing frequencies starting at 5.0kHz during recording and subsequent expanding these same frequencies on playback. The later tapes were produced with the dbx noise reduction system. While dbx tapes could be played without a reciprocal playback decoding those recorded with Dolby should be played properly decoded.
Some of the record companies whose material they produced were Deutsches Grammophon, Halcyon Records, L'Oiseau Lyre, Mercury, Pro Arte and Vanguard and others. The tapes sold for around $8.00 to $11.00 and considering they were a third generation copy represented an excellent audiophile bargain. In many ways these are the progenitors of today's audiophile tape offerings from The Tape Project and Analogue Productions. While not everything is state of the art (some are jaw dropping exceptional) every one is much better than the original vinyl version. So a combination of the interesting program material (lots of film scores by Bernard Herrmann and Miklos Rozsa) and very high sonic quality make them appealing to me.
T

After polishing the Advent's faceplate, control knobs and selectors and cleaning up the real wood cabinet this part of the project is completed. Now to do some finishing touches to the tube output stage and some extended listening. 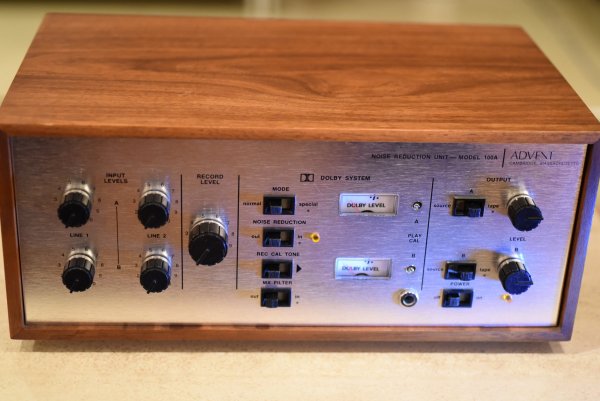 The second half of this project is nearing completion, the tube based preamp that takes the signal from the Dolby processor and provides sufficient gain to be connected to my system. The idea was to not use the transistor based amplifier found in the Advent and have some fun and learning experience at the same time. Since the original Knight tape preamp used several tubes in the recording and bias sections which I didn't need there were some adjustments needed for the high voltage B+ and the heater supply. They were too high and the dropping resistors had to be changed to bring everything within the original design. After doing this I added the tube shield over the first stage tubes and painted the bottom plate and added feet and sound damping material to the underside of the plate.
I've done some initial testing for gain and distortion and found that the overall gain was 37dB and the lowest distortion was 0.56% for the left channel and 0.66% for the right channel using, curiously enough the Shuguang and JJ 12AX7 and 12AT7 which were quite a bit lower in THD than the Electro Harmonix. I've ordered some very low noise tubes for further testing. I wanted to to keep the negative feedback as low as possible and balance frequency response and distortion against raising the feedback. Initially when I began measuring the frequency response there was a significant roll off around 75Hz and very flat at the upper range. I did some testing of increasing the value of the final interstage coupling capacitors and found that going from 0.15uF to 2.0uF made a dramatic improvement. In fact the frequency response is within 2dB from 16Hz to 28kHz and for most of the audible range the amount is less than 0.1dB. I know full well that sound quality is what counts, but measurements are important also. 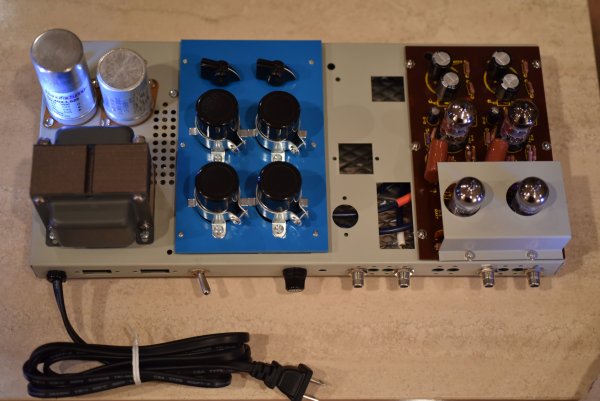 Tapepath, nice project! A couple of questions... do you need that much gain? I presume the first tube's triodes are arranged in the standard 2-stage with feedback configuration, and the second tube is a follower?

I am quite surprised at the 2uF value of the decoupling caps - what is the value of the second tube grid resistors?
T

Thank you, I've learned quite a bit from this project. I probably don't need that much gain since the original design incorporated tape playback EQ and I was making the circuit linear the open loop gain could be reduced. The original design had used the second tube's (12AT7) first half used as another gain stage and the second half as a driver for the VU meter. My idea was to do as you pointed out, make the second tube a cathode follower. However in doing some reading I determined that the 12AT7 wasn't a good choice for that application due to voltage limitations between the filament and the plate. So, I kept the original configuration and would use low capacity cables between the preamp and my system. The second tube's grid resistor is a 1.0M in series with a 3.3K resistor, there is an echo circuit in the original design at this resistor junction which I've not included.
T

I thought I would see if I could make some measurements of this preamp using different tubes. Keep in mind this is a linear amplifier there is no equalizing needed, what goes in gets increased by 37dB and appears in the output. I tried three different new production tube sets (a single 12AX7 followed by a single 12AT7) one set a combination of JJ Electronics (12AT7) and Shuguang Electronics (12AX7). A second set with both tubes made by Electro-Harmonix made in Russia. The third set I chose were from RAM Labs, a company founded by Roger A. Modjeski and, as far as I know, the most thoroughly tested vacuum tubes available. I chose the super low noise versions of both tubes.
This is a frequency response graph I plotted, with the JJ/Shuguang on the top, the EH in the middle and the RAM tubes on the bottom. For the test frequencies I selected 440Hz (middle A on a piano) and the octave frequencies above and below. These test frequencies ended up being 13.75Hz, 27.5Hz, 55Hz, 110Hz, 220Hz, 440Hz, 880Hz, 1760Hz, 3520Hz, 7040Hz, 14,080Hz and 28,160Hz. These test frequencies represent the even harmonics of a tone centered around middle A when played by a piano. The left side is divided into 1.0dB increments.
Mr. Modjeski maintained that the tubes themselves didn't have a way of changing the sound. What does change is how each circuit performs with different tubes. As you see by the lines the top two allow the circuit to begin a slight emphasis of upper frequencies. The lowest line has a gentle roll off with the difference between the two extremes adds up to 4.2dB at 28,160Hz. In my opinion clearly audible after careful listening. I hope this is interesting.
As an aside, the preamp with RAM Labs tubes has -3dB limits of 4Hz and 50,00Hz, not bad for an old technology. 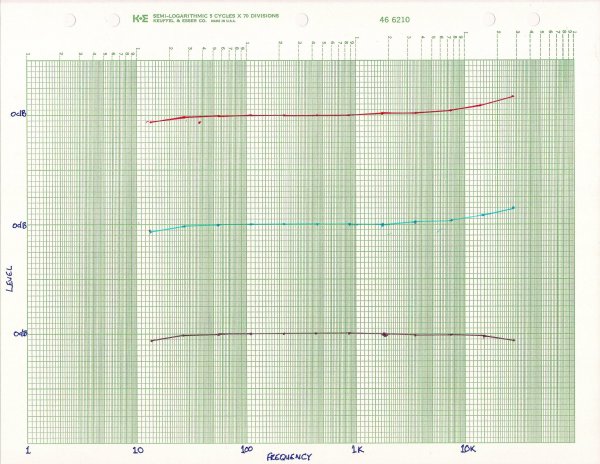 As the general rule I don't like high gain tubes, unless I need whole lot more gain. If I were you, I would consider replacing the first tube with a 6922, and take the output directly from the second tube plate. You would get less open loop gain, so less feedback would be needed, and the output resistance is going to be sufficiently low for interfacing with your preamp. i would remove the second tube altogether, and use the power reserve to increase the first stage currents. I realize that might be more work than you would like.
T

Thank you for your suggestions, I've started looking at the 6922 and what I would need to do. Any thoughts on how a 5751 in place of the 12AX7 would do? I think I have some black plate RCAs in my Conrad Johnson I could try.
Again, thanks!
You must log in or register to reply here.
Share: Facebook Twitter Google+ Reddit Pinterest Tumblr WhatsApp Email Link